As international travel opens up again, and we await the next tourism boom, it’s residential renters who will pay the price of uncaring “sharing” when ever more rentals are turned over to short-term lets.

But one Flat Chat reader has come up with a simple, ingenious solution that will give renters and first-time home buyers a fair go when looking for a home.

It’s desperately needed. As our various state and federal politicians tweak, tinker and generally nibble round the edges of the housing shortage, there is an elephant in the room or, more vividly, the backseat of the car.

Much has been made of the fact that our newly minted Prime Minister Anthony Albanese was raised in social housing.

However, last week on the ABC’s Insiders, Guardian journalist Amy Remeikis commented that had his late mother been trying to work through the social housing system as it is now, he might well have been sleeping in a car.

Then she offered simple but studiously ignored information: A large part of the problem is caused by short-term holiday letting.

It’s a simple, irrefutable fact that holiday letting hosts have been allowed, if not encouraged, to eviscerate the rental market by turning tens of thousands of residential properties into short-term lets. State politicians will now say it’s too late and too complicated to undo the system.

Not so, says one Flat Chat reader – just take negative gearing away from properties that are listed as holiday lets and everybody will get a fair crack of the whip.

Kicked to the kerb

The recent Covid-created hiatus in tourist arrivals has allowed our politicians to forget that a significant chunk of the current housing calamity is largely of their creation. Renters have been kicked to the kerb, collateral damage in the scrabble for tourist dollars.

It’s hard to tell if Australian politicians were duped by the so-called “sharing” industry or they knew perfectly well that the income garnered from tourists would arrive at the cost of long-term tenants.

For years the true facts and figures about holiday lets and their effects on the broader community have been fudged, massaged and obscured.  But then the tourism tide receded and the truth was exposed like a beached whale.

As tourists disappeared from city centres and beachside suburbs, rents went down and availability went up; this cause and effect has been confirmed by academic studies (although it has never truly been in doubt).

There are at least two academic studies that prove the bleeding obvious (to everyone except our elected politicians): One from combined research by UNSW, Sydney University and the Australian Housing and Urban Research Institute (AHURI) and a more recent one by two academic researchers at UNSW.

According to internet analysts InsideAirbnb.com, there are 62,000 empty homes currently listed on Airbnb in in Australia, including 36,000 in Sydney and Melbourne alone. And there are other platforms like Stayz that don’t attract the same level of scrutiny.

If you think some of those homes might be better used to accommodate families who are currently living in tents and cars, bear in mind that these listings are at a low ebb and it will only get worse when the tourists return and more tenants are evicted to make way for them.

Part of the problem is that there is no national strategy for short term rentals – it’s all done on a state by state basis and the restrictions, such as they are, vary wildly from one to the other.

In NSW there are restrictions but they only result in a fragmented, seasonal rental market.  Right now they’re are just over 20,000 whole homes listed on Airbnb.  Pre-covid those figures were up around 55,000 and there’s not readon why they woont return to those levels as international travel opens up.

Victoria, Queensland and, especially, Tasmania, are wide open to the expansion of holiday lets, with dire consequences for residential renters.

NSW is generally recognised to have the tightest restrictions but that is only relative.  Short-term lets are only permitted in Greater Sydney for 180 nights a year – in other words, late spring, summer and early autumn.

That’s when owners and head tenants can coin in the tourists dollars then let their properties for six months to desperate renters who know their tenure will be up as soon as the first wave of tourists shuffles through Sydney Airport.

Strata schemes in NSW can prevent investor owners from running short-term lets, but not resident owners. In other words, there’s nothing to stop your neighbours – owners or tenants – from taking off for six months or every weekend and letting their pad to tourists.

NSW also has a new register of short-term lets –properties can’t be listed without an official registration number – and there is a “blacklist” for poorly behaved guests, hosts and the properties that prove to be a nuisance to neighbours.  Whether that has any effect at all will only be evident when the tourist traffic returns to normal

Short-term letting legislation in Victoria was hijacked by “party flat” fear-mongering with the Labor government wholly embracing the notion that the only problem with short-term holiday lets in apartment blocks was the occasional rowdy party.

The result?  Inner-city blocks where one-third or more of the apartments are given over to holiday lets, upmarket developers demanding binding agreements from purchasers that they will never allow their units to be listed on holiday letting platforms and tenants being driven out of the city centre.

Former Melbourne radio host John Faine once told an Airbnb spokesperson the company was “parasites and predators” as beach houses on the Mornington Peninsula were turned into all-night, all-weekend party houses.

And as for the “party flats” in the city, we have heard reliable reports of entire busloads of football club supporters booking several units in the same apartment block – usually billeting double the numbers of guests than they’re supposed to accommodate – then using the communal foyer for boozy pre and post-match parties. Take a look at Victorian action group WeLiveHere’s website to see how bad it really is.

The sunshine state is a special case, not least because apartment residents are the very last people to be considered when housing issues are on the table.

Consider this: because a lot of people in Queensland don’t want to live in apartments that are full of holiday homes for the most part of the year, and screaming, drunken, drugged-up teenagers during schoolies, the government created a special category of strata that didn’t allow for holiday lets.

Then Airbnb comes along with its “sharing” BS, their hosts claiming that they are actually residential homes rather than holiday lets, and the government and local councils turns a blind eye. A great plan to civilise apartment blocks fall like a planking schoolie.

You’d never want to get between a Queensland property investor (or caretaker or politician) and a bucket of money.

A new report just released by housing charity Shelter claims that the percentage of residential homes in Tassie that are now operated as holiday homes is seven times higher than in Sydney and 4.5 times higher than Melbourne.

The Shelter report claims that in Hobart almost 50 per cent of Airbnb short term rental properties had been taken from the residential rental market.

The housing situation is so fragile there that a slender 0.2 per cent rise in holiday rentals sees housing rental availability drop from a parlous 2 per cent to a perilous 1 per cent.

So what is the Government of a state that depends so much on tourism supposed to do? Build more affordable apartments, would be one answer but we all know that’s not going to happen any time soon.

Not sharing, not caring

Nationally, investors can make a lot more out of short-term rentals than they do from residential lets but only, experts say, by having multiple properties and treating them as a business rather than a hobby earning pin money.

This has nothing to do with sharing, so let’s bury that misnomer right now. The top 50 “hosts” in Sydney have portfolios that range from 16 homes to 170.

But if you accept that short-term holiday lets push up rents and drive out tenants with the more professionally run properties making the biggest profits, isn’t this the perfect time to retire the “sharing” myth?

Australia, according to reputable sources, has one of the least regulated short-term letting sectors in the world.  So would driving some holiday lets back into the residential market be such a bad thing?

Politicians are loath to interfere with how we manage the properties we own.  But what about banning “head tenants” from renting flats and houses then sub-letting them as holiday homes? That would be a start in achieving some kind of balance.

Or, as one correspondent wrote to Flat Chat, take negative gearing away from investors who let their properties on Airbnb and its ilk. That way we, the taxpayers, won’t be subsidising the destruction of our lifestyles.

Then residential renters and overseas holidaymakers would be competing on a level playing field, with investors no longer having their cake and eating it.

And the beauty of this is that it would be a Federal decision and the state pollies who were so easily seduced by the razzle-dazzle of Airbnb, won’t have a say in it.

It should be a source of national pride that we have a Prime Minister who was raised in public housing, but it’s appalling to think that some future leaders’ with similar aspirations might right now be sleeping in their parents’ cars.

A shorter version of this column first appeared in the Australian Financial Review. 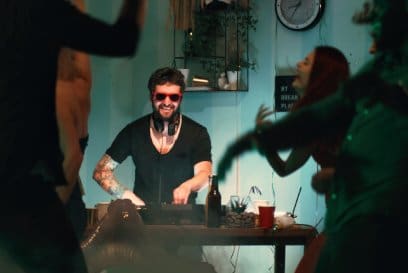 Look, we know that with half of Sydney under water and the other half trapped at the airport, thoughts of holidays are far from our minds. But foreign tourists are…

Talking off-the-plan purchases and defects – plus your calls – with James Valentine.  And why Sydney MP Alex Greenwich thinks Airbnb is bad for Sydney renters, and Mark Latham will…

Amazingly, this is our 50th Flat Chat wrap which means we have been doing this for almost a year. And yet, the same topics come up, time after time, albeit…